With the last day of RPG week 2014, I want to hit a couple of my favorite RPGs that don’t really fit into any of the previous categories I’ve been talking about. There are three series that I want to hit today – Final Fantasy, Kingdom Hearts and Pokemon – which will wrap up my thoughts on the genre, at least for now. Next week will be pretty busy with Destiny releasing on Tuesday – I plan on having a whole bunch of different topics to talk about over the next couple weeks, hitting all the major parts of the game.

First though, I want to look at the granddaddy of all the console RPGs – Final Fantasy. It wasn’t the first RPG on home consoles, but it took the reins from Dragon Quest, released a year earlier, really setting the template for the genre on the home consoles. The series stretches all the way back to 1987 on the NES and has had a longevity that few series have enjoyed. Players these days might immediately think back to Final Fantasy VII on the PSX as their first experience with the series. To this day I still think that FFVII has one of the very best magic systems I’ve ever used in a game in the materia system. Spells are tied to the individual materia, which has a separate experience level that you raise, which makes the spells that much more powerful. Because the spells aren’t tied to characters, it lets you put the spells on the party members you feel like. Combine that with a strong story, memorable characters and moments that still resonate with gamers years later, and you have a game that has an important spot in the annals of history. That said, it’s not the best game in the franchise – that title belongs to the previous game, Final Fantasy VI. While FFVII might have the more well known villain in Sephiroth bent on destroying the world, it’s Kefka in FFVI that actually succeeds in his plan. To this day gamers still are a little unnerved by that damn Laugh of his. While the games in recent years maybe haven’t been up to the same level (I think FFX was the last really good one) the future is rife with potential, with a number of new games on the horizon.

Sticking with the Square-Enix games, I want to talk a little bit about their partner series with Disney, Kingdom Hearts. On the surface, it’s a pairing that might seem like it wouldn’t work. The tone between Disney animated movies varies so much, and the general tone across the Final Fantasy series skews more serious. I’ll freely admit that I was skeptical of it at first – it took my friend showing me it in action to convince me. In practice, it works so well it’s almost like they were meant to. Playing more like an action game, since the combat is in real-time, the game feels different enough from Final Fantasy that even with the familiar characters, it manages to form its own identity. Playing through the iconic worlds that the Disney movies take place in opens up all kinds of story telling options. An extra detail that helps ensure that this was going to be a unique and serious game, not a cash in style game, was creating the new enemy Heartless. Instead of just picking typical fantasy or RPG standards, Square-Enix created a brand new enemy and weaving their origin into the story. One thing that I haven’t been a fan of is the focus on side games on handhelds and the continual rerelasing of the older games. The good news is that Kingdom Hearts III is in the works – I would bet on hearing more either at TGS or E3 next year. 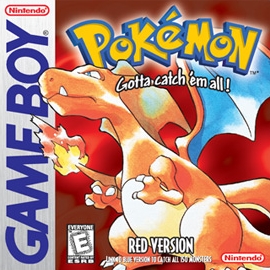 Finally, I want to talk about the first real RPG series that I think I ever really got into – Pokemon. I was ten when the first two games came out in the States – the perfect age to start playing. I got my first Gameboy that Christmas – a green Gameboy Pocket that I still have, along with a copy of Pokemon Blue. I dug right into the adventure – just really scratching the surface, focused solely on catching all 150 Pokemon. I picked the best Pokemon on the first day, and I still have that guy all these years later – my Venusaur I think has been in my party constantly since day one. Everyone knows about the explosion in popularity the series has enjoyed – and rightfully so. It’s both an accessible game for kids to pick up and start their own Pokemon adventures, bent on catching them all; but at the same time has surprisingly deep RPG elements behind the scenes. IV training, Pokemon natures, all the different mechanics that go into typing, both offense and defense, along with the actual catching of the Pokemon. I’m not one of the players that thinks only the first 151 are the best Pokemon, but I have definitely paid no where near enough attention to the details to really think about competitive battles. To that end, I always love going back and playing the classic Red/Blue games – and ultimately their remakes on the GBA.

And with that, I think I’ve put just about all my thoughts about the biggest RPG franchises out there today. Over the last week, I’ve hit a good variety of games – Western RPGs, JRPGs, High Fantasy, Post-Apocalyptic, Third- and First-Person and even Space RPGs. It’s a genre that is full of limitless stories to tell, and the experiences always are deep and lasting – not to mention they are a good way to spend hours and hours and hours. Looking ahead, we have a real good fall for RPGs ahead of us, with a nice smattering of Shooters thrown into the mix too. It is going to be a wonderful next couple months – it really is a great time to play games.