I shared last week how I went about tackling the Robot Master sprites for Mega Man 3. Much like with those sprites, I took a little different approach to the Mega Man sprites with the weapons. With Mega Man 4, they were all bundled up together into one set – which looks alright with the fences I use for dividing and orientation removed. With this set though, I wanted to take a little more organized approach, hence my breaking the Mega Man sprites out into a separate section. In order to keep everything on one level, my plan was to put a standing sprite of Mega Man (with one exception), and the weapon’s sprite below him, followed by the menu icon. Aside from Top Spin, the plan worked pretty well – there’s a little variation, thanks to the fact that some weapons have big sprites – Spark Shock and Shadow Blade – while others are really quite thin – Gemini Laser and Needle Cannon.

So the organization worked out pretty well, but there were a couple other little things that still rub me wrong a little. First is Top Spin. As a Mega Man fan, it’s a crap weapon – I only think people use it to kill Shadow Man, and that’s it. It’s unreliable with its energy usage, and on top of that, it’s a melee weapon that requires you to spin into enemies with – and you can only use it while jumping. From a Minecraft pixel art perspective though, it’s even more annoying. One of the two colors for Mega Man’s armor is easy to match – the grey on his legs, hands and helmets. The problem is with the highlight color. According to the game artwork – it’s supposed to be a yellowish color:

However, the in-game sprite coloring looks a bit different. That yellow, which would be no problem replicating in Minecraft, isn’t in the sprite:

Instead, that looks a lot like a pinkish-grey color. And while there is is a pink wool, and even pink clay, both have too much red in them to really act as an analog. So I ended up using the pink clay, but I’m not super happy with out it turned out. If there’s an update down the road that offers a better option, this is definitely one detail that I’ll go back and change. The other issue was also with Top Spin. It doesn’t actually have a weapon sprite – when you fire it in mid-air, you spin around a whole bunch – that’s the attack. So I used the jumping sprite for Mega Man, but instead of also using the crappy pink color for the spin lines, I just decided to forgo them completely. So Top Spin is a little off compared with the rest of the Mega Men.

Once I had finished up the Mega Man work, I decided to look at the buffer zone between Mega Man 4 and Mega Man 3. I had originally planned on putting in various sprites of Mega Man, Proto Man, Rush and even Robot Masters that I liked. What I instead went with was a repeating pattern of the 1-Up power-up (Mega Man’s Head) and the E-Tank pick-up. I had left a bit too much space horizontally, so when I go ahead on to Mega Man 2, I know to leave a bit less, to give me a nice even split. I think 20 blocks will let me have two free spaces on either side of the widest parts of the sprites. But the nice thing is that with the white carpet placed down after, it looks pretty good. It’s certainly better than just having blank space – it gives a bit of a feeling like wallpaper to me.

Which brings me to my plan of attack for this week. I still have a bunch of free space in the sprite field, so much like I did with Mega Man 4, I’m going to add in an extra portrait. Instead of making the one for Wily, which would go with theme, I think I’ll do Break Man (Proto Man) and if there’s still space enough, I will do one of the busted ones from the Doc Robot phase. After that’s handled, I need to extend down the buffer pieces down to the sprites, carpet it, and then it’s on to Mega Man 2. I would say I’m probably only a couple hours away from moving on, which I can’t wait. Mega Man 3 definitely has been a much more complicated project than Mega Man 4 was. I don’t expect Mega Man 2 to be that rough, but I will be making sure to not add in more user error like I did this time around. 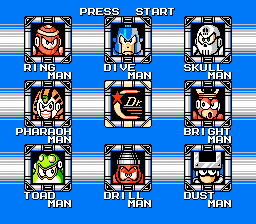 While I haven’t exactly been working quite as diligently on Mega Man Land within my Xbox One Minecraft world over the Christmas week – especially considering my birthday was last week too – but I certainly have made good progress on it. In last week’s update, I showed, or at least tried to show, the two major sections of the Mega Man 4 area – the Title and Stage Select screens; as well as set up my plan for the Robot Master sprites.

The initial plan was to build them up vertically – and that plan quickly changed as I was working through building Toad Man. Going vertically – which may have looked real cool, but probably would have obscured the view of the bigger screens – was going to be a much slower process than I liked. The big issue boiled down to the fact that the RM sprites have so much diagonally set lines – which going vertically with no backer makes it more time consuming, since you have to frame it up. The other option would have been going through each line in the sprite, individually to build them, which again, would be real slow going.

Also I made a second and third addition to the “sprite sheet field” that has made it a bit more complicated/cluttered but in the long run I think will help it look even better. The original idea was to just put the eight Robot Masters initial sprites, in the order that I play them, along with signs with their DWN number, weapon, and weakness. While that is still the plan, I also added in a second sprite of Mega Man, using that RM’s weapon, along with the actual weapon sprite. Using the sprite of Mega Man actually firing the weapon results in a few changes across the board – the Rain Flush and Pharaoh Shot both are thrown weapons, while Flash Stopper is a full screen flash weapon (meaning the sprite is just Mega’s standing sprite) and Skull Barrier is a standing shield weapon. The rest are of course regular shooting sprites, but the variation in size within the RM’s also means that there aren’t quite perfect straight lines across the board.

The other addition I made, which will probably be changed around with the later games at least, was adding in the weapon tile in that same field. With Mega Man 4 they added in a full screen pause menu that featured all of the weapons, along with a small, 16×16 tile illustrating the weapon. I took that tile and dropped it into the field surrounding the Mega Man sprite. While they look fine there, again, there’s a lot of variation which makes the placement of the tile a little bothersome. Moving forward, if the game has a tileset for the weapons, I’ll probably break out the pause menu as a third screen project. That should work fine with the games after Mega Man 4, and I can probably finagle something for Mega Man 3, the first two games will be a little different.

As far as actual progress, I’ve got two more Robot Masters to build – Dive Man and Drill Man – along with their weapon sprites. Beyond that there’s the matter of cleaning up the whole Mega Man 4 field, looking at the blank space I have left and maybe making a few last minute upgrades to make it look even better. One thing I definitely want to look at is whether it’s worth taking a look at Ring Man, Drill Man and Bright Man’s portraits to see if the new dyed clay blocks would make them look closer to the actual art from the game. Anything else would just be extra fluff to make it look nice, and would also help me space it out on either side for Mega Man 3 and Mega Man 5. And as far as the next true step – I will be heading backwards through the series, starting with the Stage Select for Mega Man 3 – which I’ve mentioned will be a tricky deal. It’s a slow process for sure, but I always get a little surprised when I finish a section, fly way up to look it over and see it from above. It really does look pretty damn cool, and I am really liking the overall plan for sure.